The KONARK SUN TEMPLE ODISHA , also known as the Black Pagoda, is in the Indian state of Odisha. The temple was built by the Eastern Ganga Dynasty during the mid 13th century. The temple is listed in the UNESCO’s World Heritage Sites and is essentially one of the 7 Wonders of India. As the name suggests the temple is dedicated to the Sun and is built in the shape of an Indian chariot with wheels carved besides the temple. The temple was originally built at the banks of the Chandrabhaga River, but the waters have receded.

Built in the shape of the Sun god’s chariot the temple has 12 pairs of wheels which were carved out from stone. The wheels of the temple also serve as sundials which were used to denote time according to the position of the Sun. The Kalinga style of architecture is pretty evident with the elaborate carvings. The temple stands on the site of a previous temple which was built around the 7th century AD. The current temple was built by the Eastern Ganga King Narsimhadeva I to celebrate his victory over the invading army of Tughral Tughan Khan during the era of the Delhi Sultanate. The temple structure that stands today is only a shadow of the massive structure that stood till it was mysteriously destroyed around the 19th century. Several theories exist regarding the collapse of the temple structure.

Many Hindu scriptures mention Konark as an important place for worshipping the sun. There’s one that says Konark was the place where the first Sun temple was constructed. Samba Purana, an ancient text dedicated to Surya, tells the legend of how Samba, son of Lord Krishna, built the temple to worship the sun. It is believed that worshipping the sun was started by Samba. As the legend goes, Samba built a sun temple in the 19th Century BC at the end of his 12-year long worship of the Sun at Maitryeavana. This worship cured him of leprosy that he was suffering from.

In his book “The Sun Temple Konark” (1986), author Balram Mishra lists down several legends that led Narsimha Deva to build a sun temple in Konark. One of them states that King Anangabhima Deva worshipped Surya, the result of which was a longed-for son in the family whom he named Narasimha Deva. King Narasimha built the temple as an act of gratitude to Surya. Another legend, a copper plate inscription of Narsimha Deva II (The Konark Sun Temple was built by Narasimha Deva I)in 1295 AD says mentions Narsimha Deva I fulfilled the promise of his father to expand the Jagannath Temple in Puri, which was built by King Anantavarman Chodaganga. 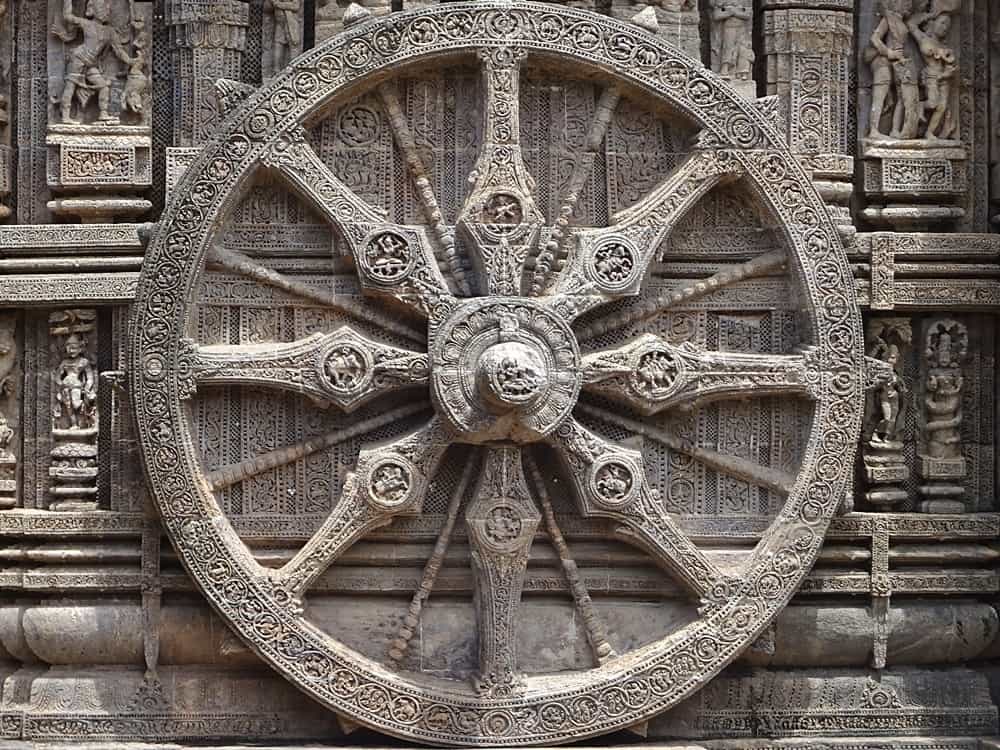 As a ruler, Narsimha Deva I was a powerful monarch and he defended his kingdom against the army of Tughral Tughran Khan from the Mamluk Dynasty in the 13th century. In 1244 AD, Narsimha Deva I defeated Tughan Khan’s army in the province of Varendra (which is now in Bangladesh) and Rarh (a region between Ganga Delta and the Chhota Nagpur Plateau).

The inside of KONARK SUN TEMPLE ODISHA is as glorious and magnificent as it is made to be. Its architecture has all the defining elements of the Kalinga architecture – it includes Shikhara (crown), Jagmohana (audience hall), Natmandir (dance hall), and Vimana (tower). Several legends mention that the architecture of the Konark Surya Mandir is so accurate and intricate that the day’s first light fell on the image of Surya in the sanctum sanctorum of the temple, known as the Garbha Griha.

Depth of Information Through Design

The Konark Sun Temple is built in the form of a mammoth chariot that Surya rode. It is said that Surya rode across the sky on his chariot pulled by 7 horses. The platform of Konark is engraved with 24 wheels of the chariot. The numbers 7 and 24 hold a lot of significance. 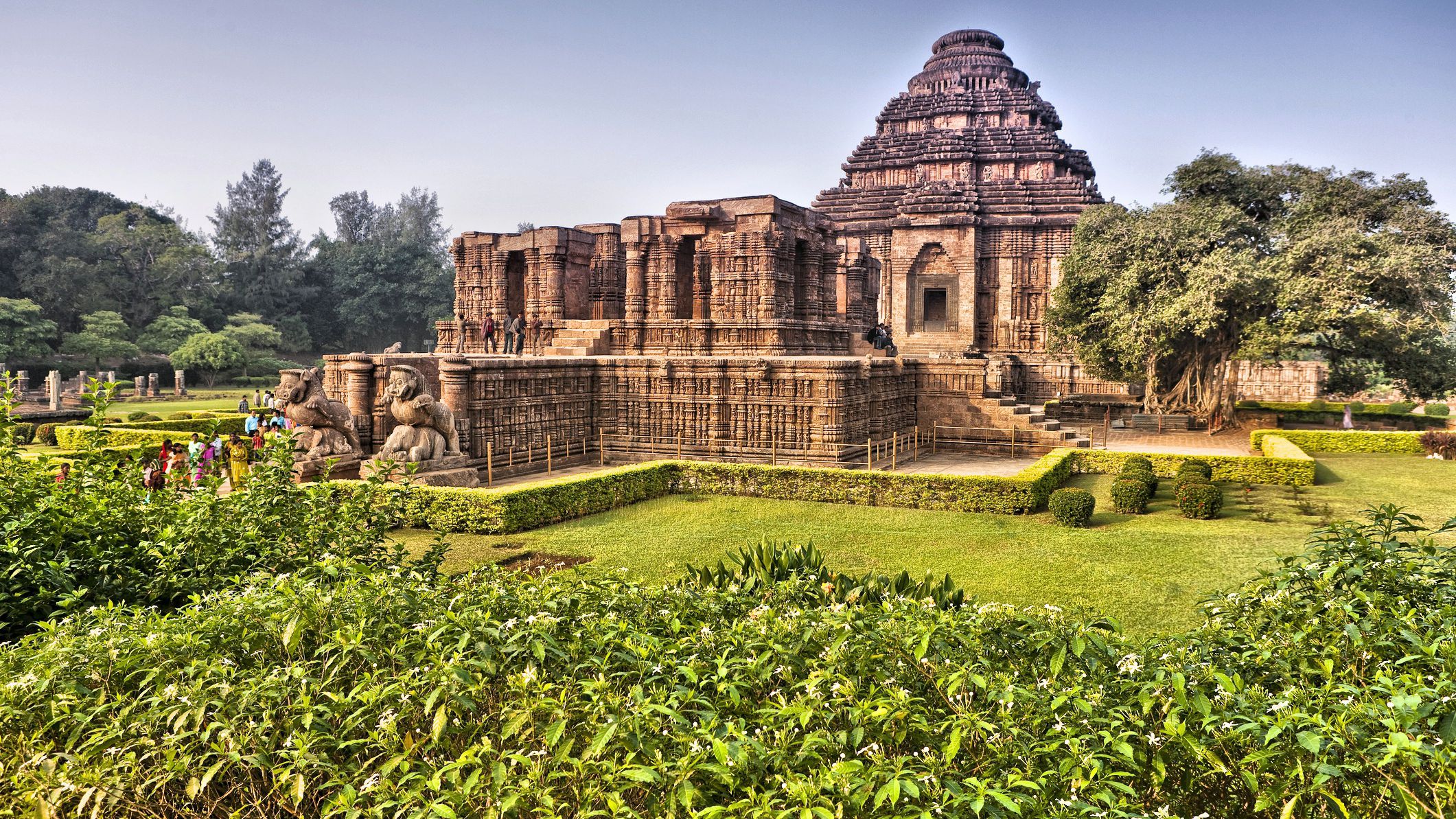 Some say that the 7 horses represent the 7 days of the week, while others say that 7 horses represent the 7 components of white light that we know as the VIBGYOR. Number 7 is said to be a magical number because it’s present all around us, spiritually, historically, and materialistically. For instance, in Hindu weddings, the bride and groom take 7 rounds of Agni, the Fire God; the periodic table has elements in the groups of 7; an octave as 7 musical notes, and so on. So, the 7 horses may just represent the magical number that surrounds us.

The number 24 represents the 24 fortnights in a year and also the 24 hours of the day, something that Ashok Chakra in the centre of the Indian flag also represents.

The chariot of the Konark Sun Temple is 100-feet high. But what you see of the temple is what remains of it. Next to the chariot was once a 200-feet high Shikhara. Much of the temple’s complex has been destroyed over the years due to unknown reasons and this is what remains of it. Since the temple shows its glory even in the ruins of what it is now, it would have been a thousand times beautiful at its peak when King Narsimha Deva originally built the temple.

When should you visit the Konark Sun Temple?

Here’s the key bit of information about the Konark Sun Temple which is a UNESCO World Heritage site. Konark is a coastal town which means that the best time to visit it during the winters; the weather is pleasant during that time i.e. between September and March. Summer, however, should be avoided because the town can get hot and humid. And if you want to spend your time noticing the intricacies of the carvings on the chariot, standing out in the sun all day long can be exhausting. Pleasant weather will ensure that you don’t exhaust yourself by simply walking.

As for the timings, the Konark Sun Temple is open from 6 am to 10 pm. Since it’s a temple dedicated to Surya, the best time to visit is in the morning itself. That’s when you see the temple in its glory as it was intended to be. From parking to the temple, you can either walk to the chariot or take a shared auto.