This temple is one of the highlights of the city of Madurai in the Indian state of Tamil Nadu. Madurai has been inhabited for over two thousand years, and is not only one of the oldest cities of India, it is also one of the oldest, continuously inhabited cities of the world. The temple is dedicated to the Hindu goddess Parvati who is the consort of the deity Lord Shiva. The temple complex is well known for its striking gopurams, there are 14 of them in all. These are multi-storeyed gayeway towers that are covered with many thousand carvings of animals, gods and demons all painted in bright colours. The exact date when the temple was built is uncertain, but it is said to have been founded by Lord Indra about 2,500 years ago. The architecture is typical Dravidian style and the Gopurams are elaborately ornate with carvings, motifs and stucco figurines that depict the various beings from Hindu mythology. The total number of sculptures found on the temple is estimated at approximately 33,000, making Meenakshi Amman Temple an archaeological marvel for anyone who loves ancient and religious arts.

The temple is located in heart of the city of Madurai,

One of the more interesting places to visit in Tamil Nadu. During the annual 10-days festival that takes place in the months of April and May, the temple attracts more than a million visitors. One of the major attractions at the temple is the tallest gopuram. Built in the 16th century and nearly 60 metre high, it is the two golden vimanas carved with numerous sculptures many come to see. Another must see feature here is the hall of thousand pillars, especially for those who have a specific interest in Dravidian architecture and stone carving skills.

Spreading it’s spiritual aura over the souls of worshippers is the oldest temple of Madurai, Meenakshi temple. This shrine that dates back to over 2500 years is considered as old as the city it adds shine to, etched on the southern bank of River Vaigai, Meenakshi is an avatar of Goddess Parvati the consort of Lord Shiva. Also known as Meenakshi Sundareswarar Temple, it is believed that it is the same place where Lord Shiva (Sundareswarar) and Goddess Parvati(Meenakshi) tied the knot. Donning the Dravidian style of architecture, this temple was once considered to be counted among the ‘ Seven Wonders of the World’. 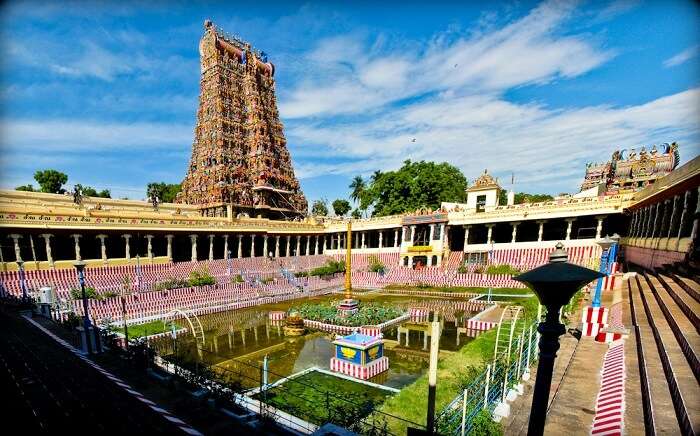 One of the things that you should not miss out while on a spiritual tour in Madurai, is the procession that is carried out by the priest of the temple. In the ceremony, a photo of Sundareswarar is carried in a chariot to the shrine of Meenakshi. Followed by a pooja that take place once the golden feet of the Lord are brought out of his consort’s temple. And throughout this process the chariot of the Lord is fanned.

STORIES ASSOCIATED WITH THE TEMPLE

If we go by the legend it is believed that the city along with Meenakshi temple rose at the same time. Furthermore, it is said that once after killing a demon, Lord Indra performed a penance and was not relieved of the burden and later came down to earth. It was when he crossed the Kadamba trees in the Pandya land, that he was relieved of the weighing remorse. Later some time he got to know it was because of the shivalinga present under a Kadamba tree that appeased the heart of the Lord. And to pay his regards to the Supreme Being he built a temple named Indra Vimana around the Shiva Linga which presently is worshipped in Madurai.

Carved in the Dravidian style of architecture, Meenakshi temple is the exquisite pearl while the city of Madurai acts as its sea. Along with having 12 vibrantly hued gopurams, the temple is renowned as one of the temples with doors in each of the four directions for the worshippers to enter. The temple whose construction started almost 2000 years ago saw its downfall in the 14 the century. It was Vishwanatha Nayakar the Hindu Nayak dynasty ruler who took the responsibility to give back Tamilnadu what it lost. And followed Shilpa Shastras, the Hindu texts on architecture as the guiding light for building the temple in 16th and 17th Century. The city and temple that was so constructed had its face towards the north to revere the Sun God.