The History of Hampi Village, Karnataka

The most searched historical places on Google in the year 2014, Hampi is a village located in the Indian state of Karnataka. The village is famous for containing one of the largest archaeological sites in India, another of India’s UNESCO World Heritage Sites. Hampi is home to the ancient ruins of the city of Vijaynagar which was the capital of the ancient Indian Vijaynagar Empire. It is known for the rich archaeology of the once prosperous city of the now extinct kingdom and the immensely marvellous Virupaksha Temple. Hampi served as a major strong hold of the Vijaynagar Kings during the 14th and the 16th centuries and is known for its several Hindu Temples. Apart from the temples, the site contains various civil buildings and structures such as the Zanana Enclosures, Elephant Stables, The king’s balance, canals and Aqueducts, Lotus Mahal and several archeological findings from the site are now displayed at the archaeological museum at Kamalapura. The origins of the settlements at the site remains to be unknown but excavations have suggested that they started around the 1st century AD. The Virupaksha Temple is one of the most popular structures at Hampi and was built in a typical Dravidian style by the Chalukyas who ruled the region around the 7th century AD. It was later restored and expanded by the Vijaynagar King Krishnadevaraya and is responsible for the construction of the pillar hall. The chariot festival is celebrated here annually during the month of February and is a must visit. 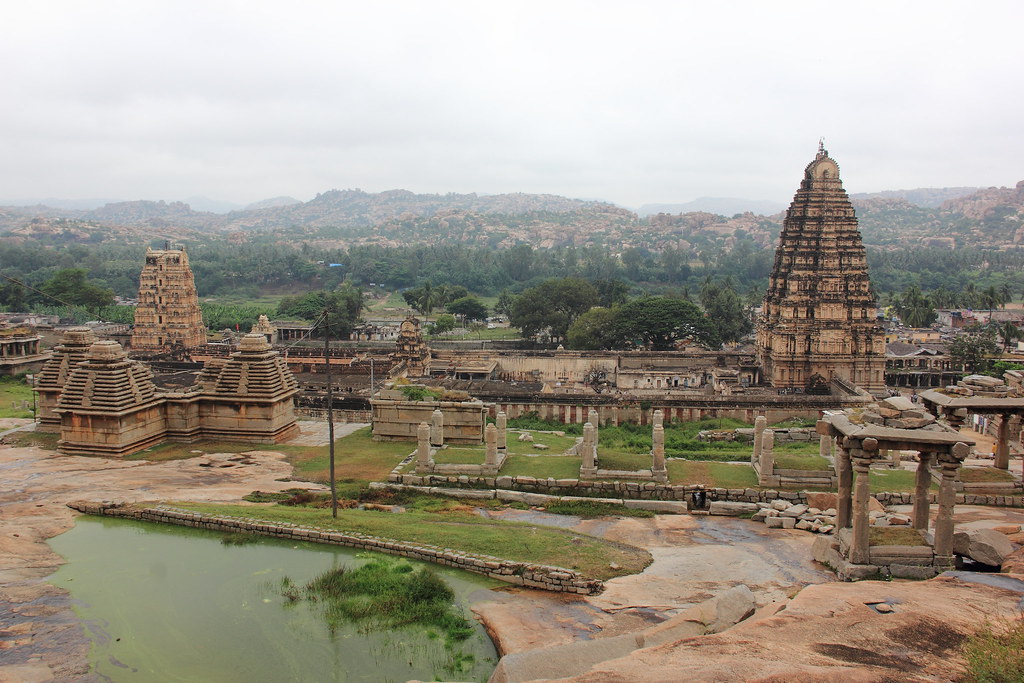 Where is Hampi: The Ruined Temple Town?

The modern-day city of Hoaspete boasts of housing the Hampi archaeological complex which is at a distance of 376 km from Karnataka’s present capital, in the Bellary district.

Hampi sits across the mighty river Tungabhadra, a region once ruled by the glorious Vijayanagara emperors. The ancient Chalukyan rock-cut temples of Badami and Aihole are also not far away from the Hampi site.

The Mythological History of Hampi

According to popular Hindu legends, Pampa or Parvati is the wife of Lord Shiva. She performed a rigourous penance atop the Hemakuta (literally, hill of gold) hills in Hampi, to bring Shiva, the loner acscetic, back to the householder’s life. The name ‘Pampa‘ transcended into Hampa and then Hampi, and thus the name of the ancient town.

Besides, Hampi is also fabled for its close resemblance to the description of the kingdom of Kishkindha, as mentioned in Ramayana. Kishkindha was the “monkey kingdom”, and the nearby Anjaneya Hills were the birthplace of Hanumana, according to lore. Hindu sciptures say that Lord Rama and Lakshmana met Sugriva and his army at this place.

The Pride of the Vijayanagar Empire

The present-day small village of Hampi was once the grand and prosperous capital city of the Vijayangar empire. Historians believe that at the zenith of its glory, in 1500, Hampi-Vijayanagara was the second-largest medieval-era city in the world after Beijing and probably the richest in India.

The city attracted its share of Portuguese and Persian travelers who give a grandiose description of the city. These factors led to Hampi’s declaratuon as a UNESCO World Heritage Site in 2003, describing it as an “austere, grandiose site”.

The picturesque beauty of these ancient and medieval structures on the top of hills and boulders make Hampi an Open Museum, “a Historian’s Paradise” indeed.

Hampi’s heritage precinct can be studied under three broad classifications:

The Architectural Marvels: Delineating the History of Hampi through Art 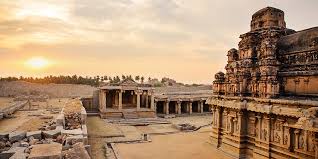 Architecture plays a significant role in the history of Hampi. The several ruined yet grand structures speak of the magnificence of the once large and flourishing empire of the Vijayanagar dynasty.

The Virupaksha Temple is the oldest down the pages of history of Hampi as we know it. The temple complex was revered as an important pilgrimage site by the worshippers of Lord Shiva, or Shaivites. The very origins of Hampi’s history revolve around this place.

Over the centuries, the temple has expanded into a sprawling complex with many pillared halls, towering gateways, and even a large temple kitchen. Among the gateways, the East-facing gateway is the greatest. The well-built framework has a gravel base, giving way to the outside court.

A renowned Vijayanagara king, Krishnadevaraya added a pillared hall to the temple which is also the most adorned structure of this temple. Also, there are plenty of ruined mandapams around the Virupaksha temple with interlinked marketplaces.

Vijay Vittala Temple and the Golden Chariot of Hampi

The Vittala Temple Complex of Hampi is the hotspot tourist attraction of the ruined temple town, besides its most extravagant architectural wonder. Vittala, a form of Lord Vishnu, was worshipped by the cattle herds as their deity in this part of the country.

Although the temple has its origins in the 15th century AD, many enhancements have been made by the successive kings bringing the present-day structure into existence.

The most significant highlight of the Vittala temple is its stone chariot. The shrine takes the form of a temple chariot. An idol of Garuda is believed to have been placed within its sanctum. According to Hindu mythology, Garuda is the vehicle of Lord Vishnu and it’s facing the temple’s sanctum is quite symbolic.

The Hemakuta hill lies between the Virupaksha Temple complex to the north and the Krishna temple to the south. The Hill houses more than thirty small-to-moderate-sized temples.

Some of these sites have ancient inscriptions showing links of Hampi with the Kampili kingdom. The Hemakuta hill also has monuments with two monolithic statues of Lord Ganesha; the Kadalekalu Ganesha and Sasivekalu Ganesha. 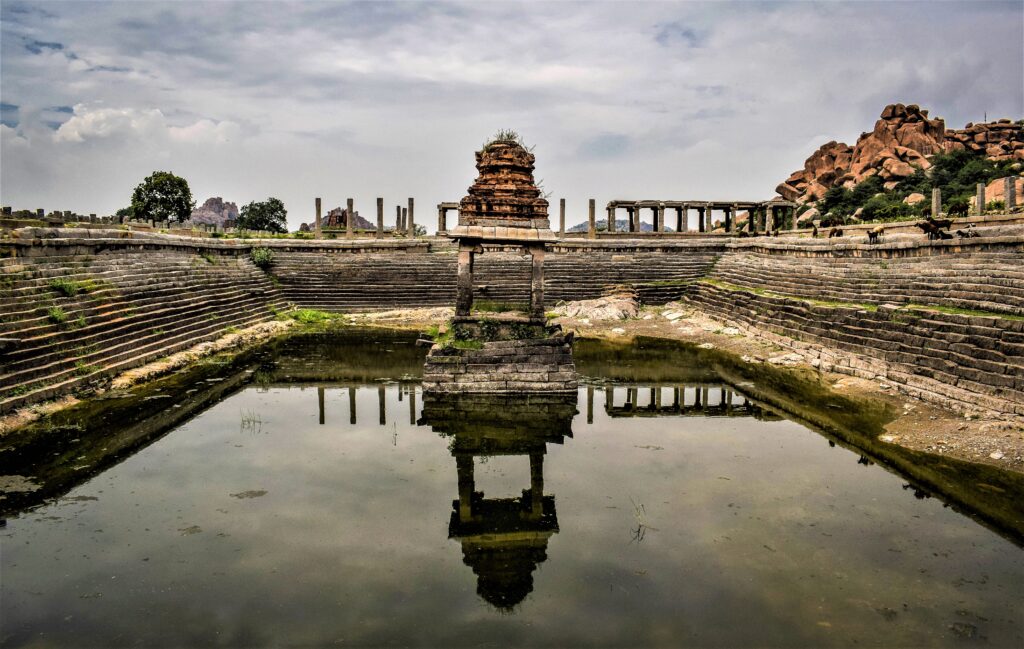 The patrons of Hampi devised a well-structured system for moving freshwater to temples and also storing it. The Queen’s Bath or the Square Water Pavillion is located in the southeast of the Royal Centre.

The Bath displays the marvelous intellect of medieval engineers. The system moved away from the wash water and overflows. The Manmatha tank is also an example of the same.

Archaeologists have also found two dozens of wells and cisterns in the Hampi-Vijayanagara metropolis. Several aqueducts were also constructed in the city to carry water to the tanks and other parts of the city.

Other Monuments of Significance

As the remnant of the glorious Vijayanagara rules, the Hampi complex also boasts of many intricately built temples ranging from Shaiv to Vaishnav cult. The Achyutaraya Temple, Hazara Rama Temple, Krishna Temple, Kodandarama Temple, and Pattabhirama Temple are the most prominent centers of worship.

The Hazara Rama temple is known for its carved walls with portrayals of Dussehra and Holi festivals. On the other hand, the Mahanavami platform resembles an audience hall with ceremonial structures. This platform is mentioned in the memoirs of some travelers.

A peculiar feature of all the temples in Hampi is their lavish community kitchens, besides pillared feeding halls connected to canals. The Hampi complex has several elephant stables used by the rulers. The King’s Scale is another mysterious monument. Legend has in it that the King used to weigh himself against gold and silver.

A Devastating End: The Story’s of Hampi’s Decline 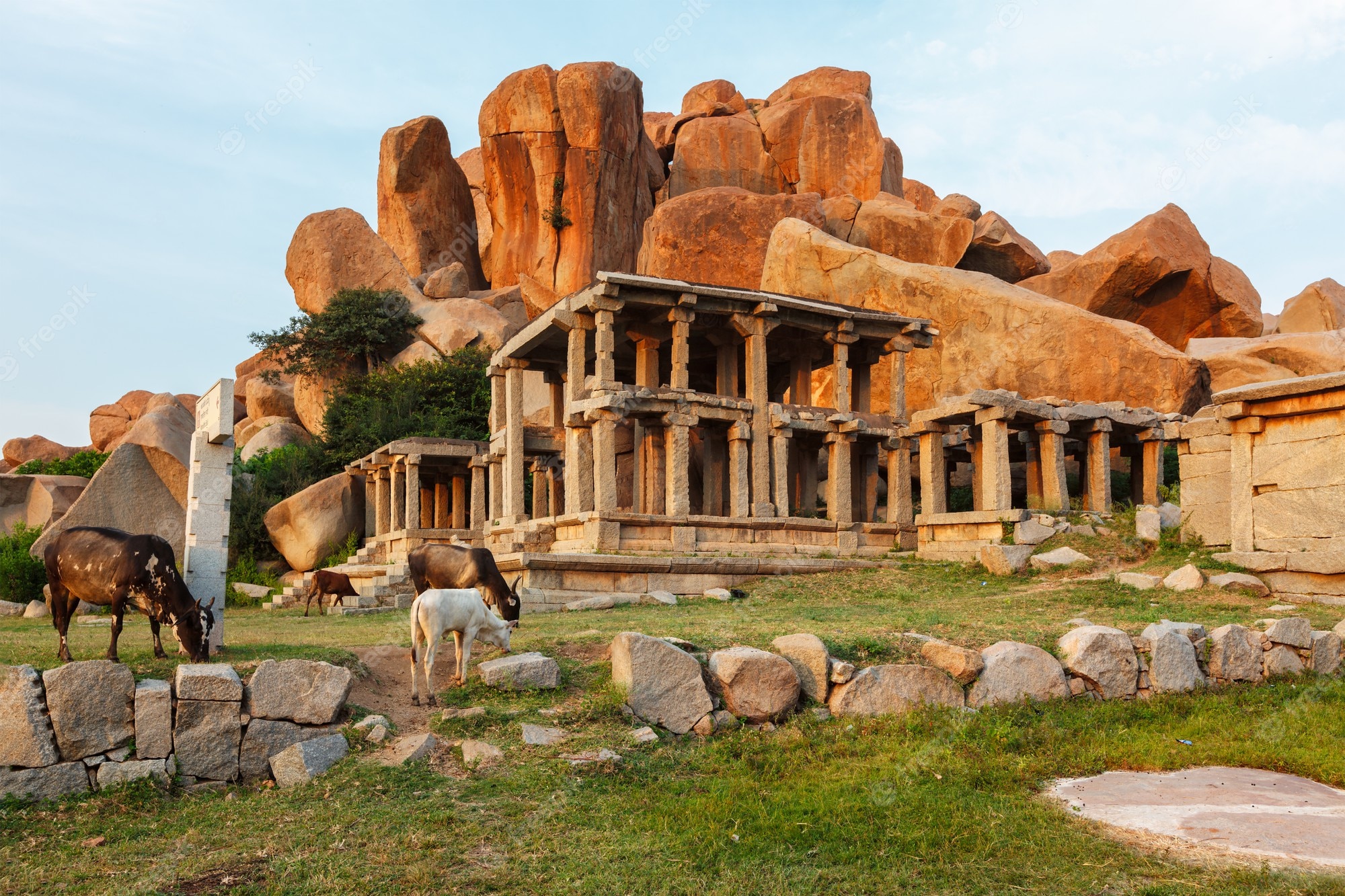 As happens with most of the temples and crafts, Hampi also degraded with the decline of its patron dynasty. In 1565, Vijayanagara lost to the alliance of Deccani Sultanates at the battlefield of Talikota.

After its defeat, the flourishing city of Hampi was sacked by conquerors, looted, and destroyed. Only the Virupaksha temple continued to attract its share of pilgrims, while the rest of the city, having gained prominence with the rise of the Vijayanagara empire, fell with the decline of the same.

The world’s second-largest capital today calls itself a Ruined Village; to us, Hampi is “a Historian’s Paradise”.